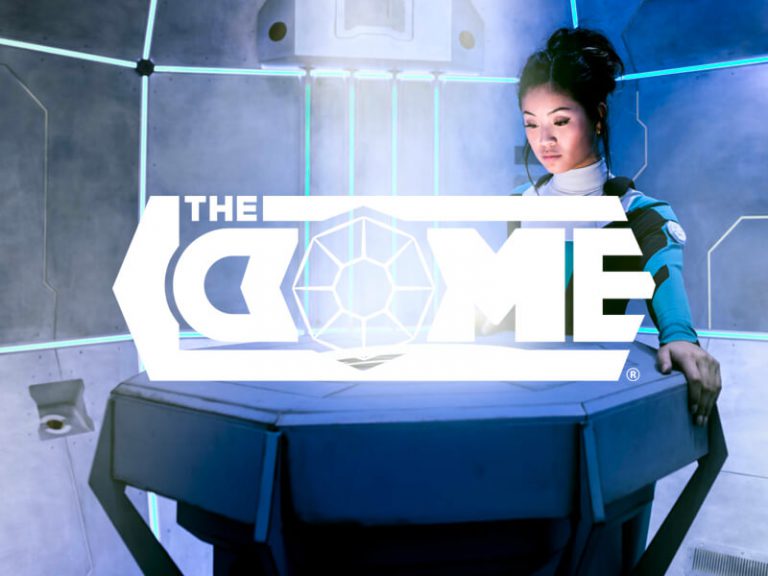 The State needs to know everything about everyone and demands total obedience, and it is for this purpose that LA DOME was created.

About 15% of the citizens are still disobedient - and these so-called Analogous Citizens will be found. THE DOME will deprogram them by controlled neuro-molecular transmission (CMNT). After treatment, they will voluntarily insert the Lolo5 chipimplant, allow camera surveillance in their homes and subscribe to mandatory social media platforms. CMNT treatments are almost perfect, but not 100%. That's why you will participate in this research.

With a group of 4 to 6 guinea pigs, you will be exposed to several tests for a maximum of 60 minutes. These tests are completely harmless. THE DOME will do everything in its power to prevent you from being exposed to CMNT chemicals.

Dr Hung and his team look forward to your stay. Your contribution to this research is of immeasurable value.

After 360 theatres in France and Austria, I must admit that we have somewhat lost our ability to marvel at a theatre. We liked to play, but not as much as before and I also admit that we were sometimes disappointed by poor quality theatres, with quick decorations, a reception that was a bit of a factory, and uninteresting riddles. You should know that our trip to the Netherlands gave us back a taste for escapes, amazed us and we are so eager to go back there!


We are going to talk to you here about the room which for us, with our current experience surpasses all the others, that will perhaps change, but the fact remains that this room will always be excellent.

This room has also just been "crowned" best room in the world by the escapade enthusiasts who were able to vote for TERPECA 2019, a project initiated by players for the players we love (yes we participated too :) ).

Start already by watching the video and you'll see that what awaits you here is just ... different!

For our second room in this sign, we're tackling The Dome room and as we liked the first one, I won't hide that we're rather eager to start, well that's not the only reason.

To discover a little more about the reception area do not hesitate to read the notice of : The Girl's room.

A lot of foreign friends (bloggers, sign bosses, addicts...) told us about this room as a UFO in the escape games landscape. It is presented on their website as a 3.0 room.

The 1.0 is for us 0 mechanism, any padlock, the 2.0 is all mechanism, 0 padlock, but the 3.0 we had never heard of it. We even started a discussion with other French players... nobody saw what it could do. So we asked the question to those who played the room. The only answer was a smile a bit blissful and ah ben the Dome, it's something else, it's an experience... well you know what ? We'll tell you the same thing: it's a venue that we would also qualify as 3.0, but we couldn't explain more than to say: yes, it's an experience, that's it!

Our MJ (one of the co-managers) starts by explaining us the pitch, basically we're here to test the program of the company that created The Dome, but it's not going to go as planned and we're going to be exposed to a gas that's going to make us hallucinate. What will happen to us during our 60 minutes in the Dome happens in parallel to the video.

At the end of the pitch, we looked at each other and we all thought the same thing: The pitch is nice, but how do you make players believe that they are hallucinating?

I'll say it right away when we walked out of the room we were all on our asses. Indeed the sign managed to make us believe that we were losing our heads in a very exceptional way. Their reality became ours, we lost all sense of time, space and forgot that we were in an escape game.

The adventure begins in the lobby and this magnificent door that will open to give us access to this science fiction space.

The immersion is immediate, everything is done to convince us that we are in The Dome. The decoration is just perfect: the materials are of quality, the light is perfectly worked, we believe we're in a film, associate to that a soundtrack from beginning to end that perfectly matches each situation we'll find ourselves in, with, rare in some French escapes, a real hifi equipment, basses that make the walls tremble, in short there again we believe we're in a movie. The spaces are surprising, as is their sequence. And then there is also a work on smells so that all your senses are involved. Sometimes when we enter a room we need a moment to realize where we are, but we quickly let ourselves be carried away by the urgent need to get into action.

There will be no moment of respite as we move from space to space, puzzle to puzzle and adventure to adventure. The puzzles are all perfectly integrated into the theme and the scenery. They follow one another in a fluid way, are very surprising because they are original and numerous enough that we will never have a moment of hesitation, but let's always know what to do. In themselves, they are not difficult, so we will never be frustrated, but always in the euphoria of success over and over again. And they are long enough and numerous enough to allow all the players to participate or see what's going on.

As far as digging is concerned, there is none, but I'm a fan of digging in an escape and I haven't missed it at all, because the scenario is that at no time do we ever think we should dig and since we're all busy, we don't need to occupy a game.